Each year, the LCU Fund invites partner schools to nominate a scholar in her final year of studies who has demonstrated outstanding leadership skills in her home and / or school community. Prior recipients of the President’s Award for Excellence in Leadership are now serving on the front lines of health care, inspiring future generations as educators, providing comfort and guidance as religious leaders, working towards community change as non-profit leaders and creating art that reflects the beauty of the world around us.

About the 2022 Award Recipient 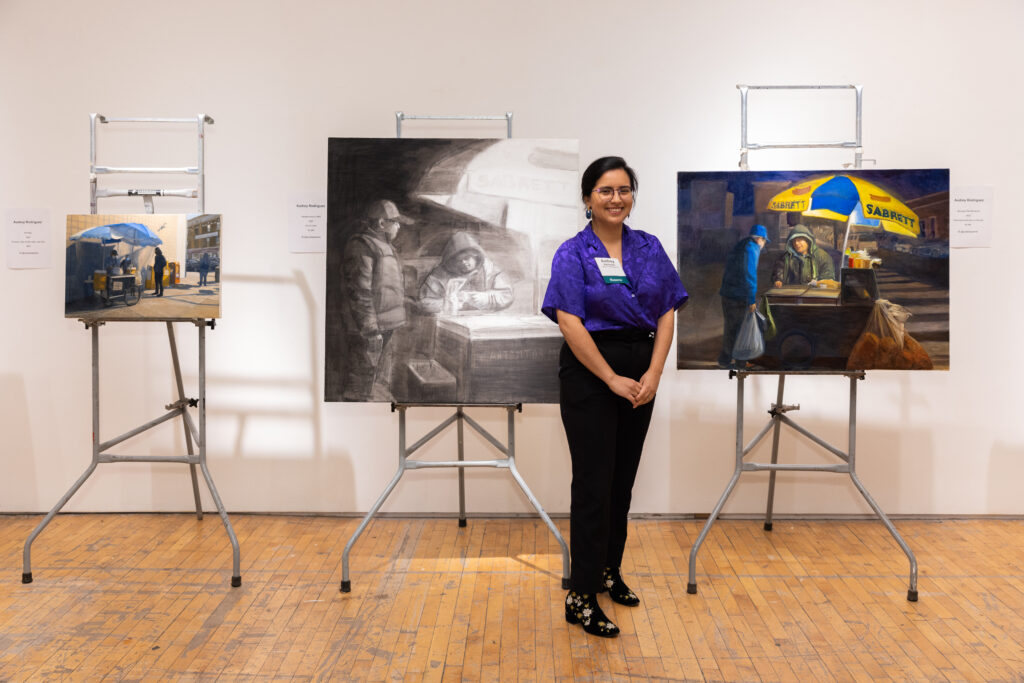 Audrey Rodriguez leads by example. As an LCU Scholar at the New York Academy of Art where she earned a Master of Fine Arts, her peers frequently sought her out for guidance and technical advice.

The Academy’s Provost Peter Drake writes, “Audrey’s work strives to focus on the unseen or the underrepresented in her community. This frequently means shedding light on food providers whose lives are rarely depicted. They are essential workers who serve their community by providing little tastes of home in a city that seems to ignore them. Food carts that sell roasted corn, empanadas, and churros late into the evening when the graveyard shift is just getting home to their loved ones. By highlighting these unseen figures, she is honoring their contributions to their community and recognizing that all stations in life are full of meaning and deserving of empathy and understanding.”

Audrey is described as a natural teacher, and she proves that every day in her interaction with her peers and in her paintings. In addition to being an LCU Scholar, Audrey was selected to be a Chubb Third Year Fellow by the faculty and administration at the Academy. Audrey is currently serving as an adjunct instructor at the Fashion Institute of Technology.

Hindia Omar-Miller just completed the Masters Direct Entry (MDE) program at Columbia University School of Nursing and plans to become a Psychiatric-Mental Health Nurse Practitioner. As a native New Yorker committed to improving the health of vulnerable populations, she aspires to improve the mental health of low-income communities of color right here in New York City.

Joyce Abioye will receive an Accelerated Bachelor of Science in Nursing degree from the Phillips School of Nursing this year. Joyce is described as a quick study and an excellent team player with a natural ability to engage with the other students on a consistent basis. One of her faculty instructors summed it up nicely by saying, “Joyce is the type of person who sees something that needs to be done and does it.” A great testimonial for a future leader.

Munira Pulodi recently received her Master of Public Administration from the Austin W. Marxe School of Public and International Affairs at Baruch College. Munira is exceptional at what she does; a natural leader who has found her place at the intersection of her passion for teaching language and an extraordinary ability to connect her students to the global community.  Wherever Munira has found herself, she has played a vital role in teaching students about the power of language and the ability to communicate across cultures. While studying at Baruch, Munira served as a Marxe Ambassador whose role was to assist with prospective student outreach.

Muthoni (Nonny) Mahachi recently earned her Master of Social Work from New York University’s Silver School of Social Work. She is described as approachable, accessible, and person-centered by her peers. She served as the President, Social Justice & Diversity Representative, and Treasurer. During her tenure, she developed strong relationships with faculty and staff to help improve the student experience in and outside of the classroom. Nonny is an exemplary member of the Silver community and has shown tireless dedication to her peers through her commitment to leadership.

Selena Teferi is a second-year graduate student at Columbia University’s School of Social Work. Selena has excelled academically and in her fieldwork. She interned at the Hope Center Harlem where she provided case management and counseling to Harlem community members struggling with substance use and mental health concerns. She is highly respected among her peer group, faculty, and administration.  She is focused on developing a sharp social work lens and shows great promise to be an effective clinician.  Her commitment to providing evidence-based, culturally competent care to vulnerable populations is unwavering.  The leadership she has shown and the fortitude with which she has demonstrated her commitment to serving others is remarkable.

Summer Syphax is an LCU Scholar pursuing a Master of Education degree at Bank Street College of Education. Summer is highly regarded by her peers and faculty as she actively seeks out opportunities to be of service to the community. She is described as being dedicated and committed to her family, her peers, and Bank Street as an organization. Summer writes, “My personal approach to leadership has been to take on as many opportunities to learn from those whom I admire or have curiosity about.”